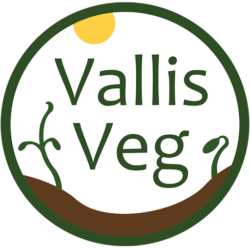 On bad days, we sometimes wonder how it’s possible to grow any vegetables at all, with a succession of critters only too keen to share in our harvest, varying in size from roe deer to aphids and all points in between – badgers, rabbits, pigeons, mice, voles, slugs, caterpillars, flea beetles and so on. Throw in the fungal and viral diseases and competing plant weeds too, and it’s easy to see how farming can sometimes seem like a huge struggle against nature.

This has very often been the approach taken in agriculture – to overcome pests by waging all out war against them with guns, traps, toxins or whatever else is to hand. But it’s not an approach we favour (however occasionally tempting!) at Vallis Veg for quite a number of reasons. For example, toxins often work indiscriminately, killing beneficial creatures as well as harmful ones. In the longer term, their use also leads to immunity building up in the pest population, fuelling an ‘arms race’ that the farmer can never really win (this is always worth bearing in mind when people say that GM crops will overcome plant pests and diseases – in the long run, they won’t). And the consequences of pesticide use for human health remain, at best, uncertain.

At Vallis Veg we therefore try to outsmart our fellow creatures with more cunning methods such as these:

Generally speaking we think methods like these make for a healthier environment, healthier food and a more sustainable kind of farming. They’re very much the approach that has been pioneered by organic farmers, and though we’re not organically certified ourselves, this is the approach that we follow. In fact, there are some organically-approved pesticides such as copper-based anti-fungals and Bt insecticides – we’ve never used these at Vallis Veg, preferring the methods outlined above. We may feel the need to use them in the future, or at least experiment with their efficacy – but we’ll always keep this page updated with the latest information on our approach to pest control.

The methods we use do, however, have financial costs associated with them and in the short-term are not always as effective as the conventional armoury of chemical pesticides, which means that we do sometime lose some crop and we don’t always eliminate every pest. This is another way of asking our customers to forgive us not only for the higher food prices that these methods entail, but also for the occasional slug or caterpillar that you might find lurking in your vegetables or evidence that they have been there, such as holes.